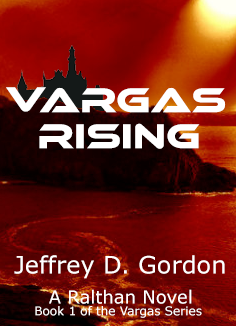 This is the novel announcement is for Vargas Rising, a science fantasy genre-bending story set in the legendary Ralthan universe. This is the piece I that began about a month before Sentry in fall of 2014. This is the infamous (at least among my friends and family) "Book 1" that I've been struggling to find a title.

It was the four chapters I wrote on this book that prodded me into believing that I could actually win NaNoWriMo for 2014 (which I did!). It features Jeri Kappel, the protagonist introduced in Sentry, and a slew of other troubled characters. While Sentry is (by design) a short, single plot, introductory novella telling us some of Jeri's backstory.

Vargas Rising has several converging plot lines leading to an epic climax dealing with the evil of a megalomaniacal genius pushed too far. It is intended to be the first of a series and a moderate (hopefully long!) story arc involving Jeri, a Pankeen Clansguard named Hal, a Latharian assassin, and an old, wizened Pankeen sage. Each has their own agenda, but they are united in their common enemy: Vargas.

Vargas threatens to unleash forces across the countryside that could potentially wipe out all mortal life. While I'm still editing Sentry as little free time I have lately, this  is my creative outlet currently (and at least one other short story featuring the Kik-Nik race and at least one character in this novel). I'll post the novel information about the tagline and blurb later this week. The tentative outline is complete and the first 7 chapters are already written. The cover above is only an announcement example, not the final product.